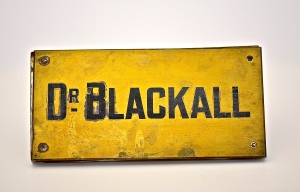 Brass name plate for Dr Blackall with incised black lettering mounted on to a wooden base with four screw holes, two screws missing

Dr Blackall was born in Ireland and graduated as a Dr in 1884 in Dublin. He migrated to Australia in 1888 and bought Dr William Morton’s practice in Queanbeyan in 1891. Dr Blackall would attend patients from Hall, Bungendore, Braidwood and Gundaroo and all the way to Jingera, Tinderry  and Michelago. At first he travelled on horseback or sulky before moving on to a T-Model Ford. He had numerous mishaps with both modes of transport, but the horse reliably brought him home the times he went to sleep from exhaustion.

His competence as a surgeon attracted patients from areas outside the district, and he was often offered prestigious positions in Sydney, but he preferred to stay and care for his local patients. His dedication nearly cost him his life during the pneumonic plague of 1919 while he cared for the sick and dying. He would not expect payment from those who could not afford to pay, but the more wealthy to cover his costs.

His dedication to the community extended to politics, giving support to Canberra as the site of the National Capital and working to ensure the employment of NSW residents to work on the new capital. Dr Blackall was a member of the municipal council from 1898 to 1905, including four years as Mayor. He was also the first President of the Queanbeyan and Canberra Medical Society, a member of the Hospital Board, a JP and a Licensing Magistrate.

Dr Blackall had seven children, with two following in his footsteps as doctors and one, a nurse. After serving the community from 1890 to 1932, Dr Blackall passed away in 1932 aged 74 years.