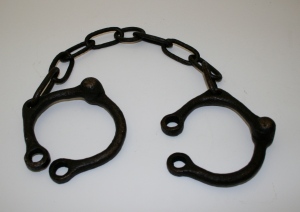 Convict labour was used to establish the sheep stations of the Queanbeyan district.

Australia’s first bushrangers were escaped convicts who fled into the bush and survived by stealing from settlers and travellers.  Convict bushrangers were active in Australia from first European settlement through until the 1830s and 1840s.

Convict bushrangers in the Queanbeyan district include the Tennant Gang: William Tennant, ‘Dublin’ Jack (J Jones), Thomas Kain and C Campbell. They were tried and convicted in Sydney in 1828. The most notorious was William Westwood or Jackey Jackey. Despite a reputation as a polite, well mannered man who was a gentleman to the ladies, he relieved people of their property, such as money, horses, weapons and valuables. An educated man, he was transported from England in 1837 for forgery and theft and had previously been convicted of highway robbery.  After escaping from a property near Goulburn in 1840, Jackey Jackey, an accomplished horseman,  led the police a merry chase around this area. In his short career he was recaptured but escaped at least seven times, before being finally captured in 1841. He was sent to Norfolk Island where he died on the gallows in 1846.