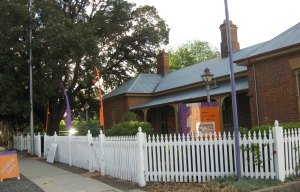 The Old Police Sergeant’s Residence
Built in 1876, this building replaced the former police barracks in Antill Street and served as the Police Sergeant’s Residence for close to 100 years. It was constructed by John Kealman, a well-known local builder, at a cost of £1,000. The bricks for the building, laid in English bond, were made by John Kealman at his own brickworks in nearby Garryowen. This is the residential area directly across from Queanbeyan Park, bordering on Campbell Street.

The building is a good example of the Victorian Regency style of the late 19th Century and originally formed part of a complex of official Government buildings, including the courthouse and post office, since replaced by more modern buildings. The rear section of the building, the kitchens, were constructed around 1910. These later became quarters for the local detectives. The lean-tos on either side were added in the late 1950s.

From 1976 to 1978 the building served as the temporary police station during the construction of the new Police Station and Courthouse next door.

HISTORY OF THE POLICE SERGEANT’S RESIDENCE – THE BUILDING
During the 1860s and early 1870s, the Queanbeyan Police Constable and his family were accommodated in police barracks in Antill Street . The barracks had replaced an older structure for the now-disbanded mounted police that had been erected at Barracks Flat in 1838 .

By the mid-1870s, the Antill Street barracks were said to be in a dilapidated condition and new ones were needed. On 13 November 1874, the NSW Department of Works advertised a tender for the erection of ‘Police Buildings’ on the reserved site next to the Court House in Farrer Place. The Department selected the local builder John Kealman as the successful tenderer in December. The new barracks were probably designed by James Barnet, the NSW Colonial Architect.

Progress with construction of the building was slow. Work was delayed for several months when the local residents petitioned the government – unsuccessfully – for an alternative site for the barracks. Later, Kealman had to obtain a court order to secure the return of the plans and specifications from another man who had taken them from him and refused to give them back.

Completion of the Barracks Kealman eventually completed the barracks in October 1876 at a cost of £1,079. Constructed of hand-made brick laid in English bond, the building consisted of a pair of semi-detached cottages, with a kitchen block at rear. The completion of the building came none too soon for the incumbent Police Sergeant, Martin Brennan, and his family. The Goulburn Evening Penny Post reported that if they were to stay in the old Antill Street barracks much longer Brennan would have to fix the shingle and bark roofing of the building to stop it leaking in wet weather. Brennan and his family, together with his assistant constable, moved into the new building in November 1876. Brennan and his family left Queanbeyan in 1880. He eventually rose to the rank of Police Superintendent and achieved fame on his retirement in 1907 when he published his Reminiscences of the gold fields, and elsewhere in New South Wales: covering a period of forty-eight years as an officer of police. He died in 1912.

Alterations to the Building The building underwent alterations in 1881 with the addition of a Lands Office and extra office space on its Lowe Street frontage. An office for the Clerk of Petty Sessions was added in 1891. Although the building was originally built as the town’s new Police Barracks, it eventually became known as the Police Sergeant’s Residence. After 102 years of continual use as a police building, it was vacated by the Police Force in July 1978.

JOHN KEALMAN
John Kealman, the contractor responsible for building the Police Sergeant’s Residence was an immigrant from Scotland who was first employed in the local area as a carpenter at George Campbell’s Duntroon property in the 1860s. Learning how to make bricks of good quality, Kealman soon moved into the building trade. He was involved in the construction of St Stephen’s Presbyterian Church in Morisset Street in 1872-74, built the original St John’s Presbyterian Church in Bungendore in 1875 and, in the same year, erected the ‘Edinburgh House’ millinery and drapery store – now Walsh’s Hotel – for his wife Julia in Monaro Street, Queanbeyan.

Kealman completed the building in October the same year, the Queanbeyan correspondent of the Goulburn Herald remarking that ‘the work no doubt reflects credit on the contractor, Mr. Kealman.’

The standard of Kealman’s work earned him many more building commissions, particularly government contracts. He did the carpentry for the rebuilding of the spire of St John’s Church in Reid ACT in 1876-77, constructed additions to the Queanbeyan Court House and Gaol in 1877 and 1878 respectively, and erected the Bungendore Public School in 1879, the Queanbeyan Post Office in 1879-80 and the Presbyterian Manse in Morisset Street in 1883. To enhance his business and the quality of his work, Kealman established an imported brickmaking machine on the Garryowen Estate near Uriarra Road in 1879. This enterprise, the first of its kind in southern New South Wales, produced 4,000 high-quality bricks per day.

Kealman and his family left Queanbeyan for Sydney in the mid-1880s. In Sydney, he became the licensee of the ‘Exhibition Hotel’[1] in Devonshire Street. He died on 27 October 1909 and his wife in January 1918.

[1] This is probably the Royal Exhibition Hotel at 86 Chalmers Street, Surry hills, on the corner of Devonshire Street.

QUEANBEYAN’S JUDICIAL AND ADMINISTRATIVE PRECINCT
The Police Sergeant’s Residence is the oldest-surviving representative of Queanbeyan’s judicial and administrative precinct centred on Farrer Place. The precinct had its origins in 1861 when the town’s first purpose-built Court House was erected on the corner of Lowe Street and Monaro Street – now Farrer Place.

Initially, the court complex comprised the Court House with an attached police station and a watch house with five cells and an exercise yard. A home for the lock-up keeper and his family was built outside the wall of the watch house and stables were erected further south of this building.

The Judicial Centre of Queanbeyan The area’s role as the judicial centre of Queanbeyan was cemented when, with the formation of a single unified New South Wales Police Force in 1862, the strip of land along Farrer Place from the Court House to Campbell Street was reserved for ‘Police Purposes’. This included the future site of the Police Sergeant’s Residence.

In 1869 improvements were made to the gaol that included the addition of a hospital room. At the same time a brick-lined well was built in front of the stables by James Cooper and Samuel Taylor. It was specifically to provide water for the police horses. The Police Sergeant’s Residence was eventually erected in 1875-76, while in the latter year three jurors’ rooms were added to the court and watch house complex. The area soon developed from a purely judicial complex into a larger administrative precinct. On the Lowe Street corner opposite the Court House, a handsome Post and Telegraph Office was completed in 1880. Across Farrer Place from the Court House, a site was reserved in 1887 for a municipal town hall. The Queanbeyan Council Chambers were erected on this site in 1925. In the same the Yarrowlumla Shire Council Chambers were built on a neighbouring allotment.

Court Complex Demolished Except for the Police Sergeant’s Residence, the court complex was demolished in its entirety in 1876, and the Yarrowlumla Shire Council Chambers were demolished in 2007. Despite these losses, the area retains most of its traditional role as the judicial and administrative centre of Queanbeyan. The old Court House was replaced by a new Court House and Police Station complex in 1978, and the State government office block was erected on the former Yarrowlumla Council site in 2008. Of the two original buildings, the former Queanbeyan Council Chambers have been converted into the Visitor Information Centre, while the Police Sergeant’s Residence has served as the Queanbeyan and District Historical Society Museum since 1976.

The Queanbeyan Museum was first established in 1969 by the Queanbeyan and District Historical Museum Society, and was originally located in the Caretaker’s Cottage in nearby Queanbeyan Park.

In 1979 the Police Sergeant’s building was designated for use as a Museum by the State Government and was officially opened to the public in January 1981. The Museum has been operated since then by members of the Historical Society. Since 2003 The Museum has been managed in partnership with QCC now Queanbeyan Palerang Regional Council.