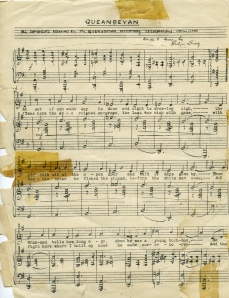 The song was written by Evelyn Grieg, who wrote several such themed songs, but signed the song over to the Mayor of Queanbeyan, John Esmond, and the Committee organising secretary, E. Colin Davis, for ten guineas.

Evelyn Grieg was a well known musician who wrote a number of similar songs such as The Song of Sydney, Our Land Australia and Australian Battle Cry (NLA MusicAustralia). She had been a vocal coach in New York and was a musical advisor at the ABC in Sydney.

The Song of Queanbeyan
Verse One
At set of sun when day is done,
and night is drawing nigh
The old folk sit at the open door
and talk of days gone by
Then Grandad tells how long ago
when he was a young bushman
He founded a homestead on the plain
at a place called Queanbeyan

Verse Two
Twas here the Aborigine reigned,
the land was rich with game
With humble spear he fished the stream
before the whiteman came
And right here where I built my home,
he made corroboree
And the stately emu used to roam
beneath the blue gum tree

Verse Three
A century has passed since then,
With changes wrought by man
But still I find it wondrous fair,
My home in Queanbeyan
This little spot in New south wales,
Is the place where I belong,
And as I roam the hills and dales,
You will hear me sing this song.

Chorus
Queanbeyan, Queanbeyan,
I always long for you,
The open plains, the golden grain,
beneath the skies of blue,
Tho near or far where ere I roam,
Just like a boomerang,
I’ll always come back to the dear old home
in Queanbeyan

The song is of local historic importance as marking a significant occasion in Queanbeyan’s development, and as part of a conscious effort by the Mayor and citizens of the town to put forward its claims to be recognised both as part of Canberra’s history and against the more prestigious capital city. The letters of the committee demonstrate a need to involve the politicians of Canberra as well as be recognised by them. The sought after and rejected half holiday shows well the power relationship.

The original manuscript, sheet music to the Song of Queanbeyan, along with the recording of the song constitute a powerful reminder of a significant event in Queanbeyan’s history. The continued use of the song in the 21st century indicates its contemporary importance in reinforcing Queanbeyan’s identity, particularly in relation to Canberra.

Here Jack Lumsdaine like most modern perfomances of the song sing only the chorus and the first verse.

As a representative of a popular genre it has been thought worthy of retention by National collecting institutions but its principal value is in Queanbeyan as a symbol of the city’s search for identity and as a link to its local history.

Associated Objects held in the Queanbeyan Museum collection include:
1. Second copy: Printed single fold grey card with green print on cover – words and music- all copyrights reserved by the Queanbeyan Centenary Celebrations Committee. Priced Sixpence and dated October, 1938.
2. Prestophone Pty Ltd gramophone record of the song as part of a disc called Queanbeyan Centenary Songs, sung and played by Jack Lumsdaine. The recording is labeled as: Donated by Mrs Roffe (Ruth) (daughter of Stan Mason) Mrs Roffe’s first job in 1941 was at 2CA. Feeling against Queanbeyan was such that when leaving the job, she was handed this record and told “here, you might as well take this with you”.
3. One manuscript page of another entry in the Queanbeyan Centenary Song Competition from G Wright of Mt Fairy.