This silver nickel ceremonial trowel is highly decorated with engraved flowers and leaves and a carved ivory handle.

It is inscribed on the front:

Nina Fane de Salis was to become the wife of William Farrer and lived her married life on the Murrumbidgee River at Lambrigg Station. Queanbeyan’s first Temperance Society was founded in 1862 – initiated by leading citizens and became known as the Total Abstinence Society. This Society was replaced in 1871 by the Sons and Daughters of Temperance founded by Robert Sindel.  These societies were some of the first formal organizations to include women in their ranks – leading to the formation of the Women’s Christian Temperance Union that was highly influential in movements for gaining women the vote.

The Queanbeyan Temperance Hall was built in Monaro St in 1878 – this was a substantial building with seating capacity of 500 – the building still exists – and is now Ray White Real Estate – the importance of the Temperance Movement in the town was such that school children were given a half day holiday in order to attend the opening. Many important townspeople attended or presided at the opening such as John Gale and George de Salis.

The Temperance Society of New South Wales was founded in September 1832, and other societies sprang up Hobart in 1842, and by 1849 existed in both WA and SA.  The Temperance Movement in Australia in the 19th Century actively promoted abstinence from supposedly harmful activities, particularly the consumption of alcohol. The temperance movement also prominently campaigned in the lead-up to Federation, as well as indirectly promoting the enfranchisement of female voters. The 1860s was the heyday of the Temperance movement and their continuing campaign against that “fruitful source of care, misery, drunkenness and immodesty”.

Other items relating to the Temperance Movement held in the Queanbeyan Museum collection: 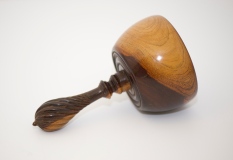